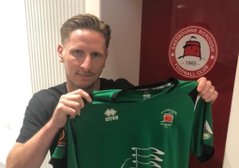 Eastbourne Borough are delighted to announce the signing of experienced goalkeeper Lee Worgan.

The 37-year old grew up in nearby Willingdon, and since making his debut for Wimbledon back in 2003 has gone on to become one of the most respected and experienced keepers in semi-pro football.

And after leaving fellow National League South side Dorking Wanderers this week, Worgan has joined the Sports on a permanent basis and is set to make his debut at Hemel Hempstead Town on Saturday, with boss Danny Bloor delighted to have the keeper available for selection.

“When the opportunity arose to sign Lee it was an absolute no brainer," said the Borough boss.

"Lee is without a shadow of a doubt one of the best goalkeepers in non league football and it is also of course a major plus to be able to sign a permanent goalkeeper.

"Lee is a major acquisition on and off the pitch and we look forward to him making his debut."

"I would like to say a massive thanks to my friend Marc White - the Dorking manager - who helped to make this move happen.

"Finally, an even bigger thanks go to our board and in particular chairman Dave Blackmore who has gone above and beyond to get Lee to Eastbourne Borough."

After coming through the youth ranks, Worgan, has enjoyed around two decades in the National League and the National South. His longest spells of service have been over the border in Kent, with Maidstone United, Tonbridge Angels and Dover Athletic, and he has also been capped for Wales Under-19s and Under-21s.

Lee began the current season at Dorking Wanderers, where his registration has now been cancelled, to enable the switch to the Lane.

Somehow – other than a brief Priory Lane affiliation in 2006 – Lee has never actually represented his home town club. But he is now set to put that right. Based currently in Tunbridge Wells, the move is a good fit with his family life.

Speaking on the club’s Facebook group after meeting his new teammates at training, Worgan explained: “It’s a club I’ve always flirted with playing for, and it’s about time to come back home! I know the club inside out, and this was the right time to make the move.

“I know plenty of people behind the scenes, and we players know each other. Charlie Walker’s sister delivered my baby! And I was with Chris Whelpdale on a UEFA B coaching course not long ago. Oh, and I knew Leone Gravata as about a twelve-year-old, when he was at an academy that I worked for here in Eastbourne.

“We’ll be looking for success and enjoyment. It’s a playing squad that’s geared to do really well, and let’s hope I can be one of the pieces of the jigsaw!”